Yagottawanna and the Chicken Sauce Empire

This morning in church, I was captivated by a talk that was given on a subject most of us would probably be interested in: the legacies we leave behind. The speaker’s message focused on a simple concept that was expounded beautifully during the course of his talk – our ability to influence the world around us. He pointed out that a large part of our daily influence is molded by the thoughts we choose to entertain and the words we choose to speak. Both carry a power that is able to shape our environment in ways that are both positive and negative, depending on what kind of attitude we adopt.

The speaker went on to talk about the results of what our influence will amount to in the world. Long after we are gone, he told us, we will be remembered for the deeds we have done, the words we have spoken, the love we have shared, and the faith we have mustered in times of trial and difficulty. The sum total of our decisions will add up to our legacy – the person we have chosen to become during our lifetime…and our legacy will determine how we are remembered throughout future eons of time.

The remarks caused me to engage in some serious reflection about where I am in my life in comparison to where I want to be. I was reminded that each thought, word, and action we engage – no matter how seemingly insignificant – comes with its own packet of spiritual energy. The energy that we choose to take into our spiritual digestive system has a sort of chemical reaction with our own spiritual make-up, causing us to shift closer to either light or darkness. Like the slowly-increasing arc of a child being pushed on a playground swing, the inner core of our being gains momentum by our minute-to-minute decisions in choosing positive or negative.

As with most of you, there have been times in my life when I have reached a strong forward push toward light and positive vibes. During those times, I have found myself on high spiritual ground, drawn to the fundamentals of happiness. As I reflected on such times and places today, I realized that a large part of my success or failure in attaining such momentum is founded in the ability to control the spiritual and intellectual matter that is being introduced into my mind. The battle seems to be won not only by forsaking blatantly evil influences, but also by forsaking the buzz of the mundane we so often encounter in life.

As the mundane is replaced with the things that matter, I think our hearts lose much of their natural inclinations to pursue destructive influences. Desires take on the shape and character of the “light” being fed into our systems, and making good decisions evolves into a natural and free-flowing process.

Choosing well becomes as simple as being pushed on a playground swing.

When those conditions are present, the law of momentum is working in our favor.

Since desires seem to be the wellspring of all human behavior, the foundation of our legacies are as secure as the energy of our momentum.

Conversely, if we consistently introducing doubt or negative thinking or into our minds, we seem to gravitate toward the source of that negativity and darkness, uncomfortably shunning light a beetle under a patio block. If we allow such a course to continue, our quality of life reflects our dark mind set, and we find ourselves subject to frequent setbacks that otherwise would be an afterthought in our life’s decisions.

A distraction I seem to be experiencing more and more these past few years comes in the form of excessive busy-ness.

As I consider the fast-moving flow of life these days, my thoughts turn to a customer I spoke with in the drive-thru window at a restaurant I was once employed with. While scrambling to find her money, she laughingly complained of the frantic pace of her life.

“Looks like the only time you’re not busy is when you are asleep,” I joked.

Then she almost drove off without her soda.

Her plight left me with some interesting food for thought.

With most of us struggling to schedule time for multiple jobs, school, church, family get-togethers, after-school activities, fitness, diet, meal prep, and all of the other things that make up our lives, how can we hope to find time to calm down and recharge our spirits?

Is there a way to weed through our constant activity, turn off the TV for an hour or two, and focus on the things that will bring a sense of lasting peace?

I’m not sure there is any one cure-all answer available to help us avoid all of life’s distractions
.
A logo on a worn T-shirt I once heard about in a General Conference talk probably provides the best council I know for accomplishing positive change in the midst of turmoil:

Desire is the wellspring of behavior.

Back at the drive-thru window, I turned away from my frazzled guest and resumed my own busy workday, stocking the shelves and preparing for the dinner rush.

Dinner rush was as predictable as March rain.

One of the reasons I was successful in the frantic pace of the drive-thru window is that I learned to use my free time wisely.

When I took over the window at 2:30 every afternoon, I was usually faced with a depleted stockpile of condiments. Lunch rush took its toll on supplies, and it was up to the person that came in at the shift-change to restock before the dinner rush set in.

I unfortunately learned this the hard way.

When I was first assigned to the drive-thru window, I took the few spare moments that were available between cars to take a break and sip from my Sprite.

I was left scrambling for supplies in the midst of the evening chaos, wondering why anyone in their right mind would want to work the drive-thru window. Orders were late, customers were aggravated, and managers looked at me with barely concealed annoyance.

It didn’t take long to learn that sipping Sprite was not the best use of my time between cars.

Though I felt entitled to such diversions, the reality of impending consequences propelled me out of my comfort zone into a more productive state of mind.

No matter what time of day it was, there was rarely a break between cars that lasted over 30 seconds, so the few moments available needed to be squeezed of opportunities like fresh lemons over tea. After working the window for several months, I developed an organized system of replenishing the condiment shelves, sometimes handing food out of the window with one hand and stocking with the other.

I found that not all condiments were of equal importance.

Some items fell into the relaxed category of “sort of” necessary.

Some were “very” necessary.

Some caused instant disaster if allowed to run out.

The worst disaster that could occur during a dinner rush was to run out of chicken sauce.

The sauces at our restaurant were a big hit, and the sauce bins on the wall in drive-thru only carried me about a third of the way through a good dinner rush. In order to compensate for this, I had to take time before the rush to build what I called the Chicken Sauce Empire.

The Chicken Sauce Empire was accomplished by stacking dozens of individual chicken sauces together in groups on the prep-counter by the drive-thru register. As the numbers increased, the stacks of sauce began to resemble a miniature city rising up boldly from the drive-thru counter, earning them their lofty nickname. If enough containers were stacked before dinner, the drive-thru cashier could hope for the sauces to withstand the dinner rush, leaving him or her with smiling customers, appreciative managers, and a smooth running operation.

The sauce packets tended to restrict movement on the counter somewhat, but the reward of having them close at hand far outweighed the inconvenience of space reduction.

Many days, I felt like I was fighting an uphill battle to get the Chicken Sauce Empire up by dinner time.

Sometimes I was only able to stack 2 or 3 individual packets before having to switch priorities and serve the next customer at the window. Sometimes a customer asked for lots of sauce with their order, depleting the stockpile I had assembled. Sometimes there were no more boxes of sauce at the front counter, causing me to leave my post at the window for a search of the stockroom.
Sometimes – every now and then – there was a short beak in customers, allowing time for rapid progress.

No matter the circumstances, I somehow succeeded most days in building the Chicken Sauce Empire before 5:00PM.

In the midst of our evening dinner rush, I would sometimes look around at the chaos and wonder how I ever found the time to construct my Empire.

In those moments, the first thing that usually came to mind was a familiar t-shirt logo:

Desire is the root of human behavior.

It is the first push on the swing of momentum.

As I prepared myself each day to face another evening in the drive-thru window, I thought about how I would try to muster the gotta wanna I needed to build another Chicken Sauce Empire.

When I got to work at 2:00, the swing of momentum would be sitting motionless, waiting for the first push to get it going.

While I would likely begin the task by utilizing my organized stocking system, time and experience taught me that success is not founded in systems.

Everyone has their own way of doing things.

Chicken Sauce Empires can be short and wide, tall and narrow….and everything in between.

The secret of successful drive-thru service was not something that could be accomplished in a teachable series of steps.

It was (and is) a secret so simple that many brush it under the carpet while searching for more intelligent solutions.

Yet the secret has the power to improve much more than the service at fast food restaurants.

It has the power to improve our quality of life and help us focus on what matters most.

It has the power to improve our legacy.

Life seems to be an awful lot like one of those twelve-count chicken nuggets that went out of the drive-thru window at dinner time.

The nuggets are great, but it’s the sauce that brings out the flavor.

The sauces of life come in such little packets you hardly even notice them.

That’s when those little packets of sauce sustain you.

That’s when you’re glad you stopped sipping the Sprite and took the time to prepare.

Yes, it was inconvenient.

You can’t really say how you managed to do it.

But somehow it got done…. and now you know what made it happen.

It’s the secret to building a great physique in the bodybuilding world, improving your strength as a power lifter, or becoming a bonafide gym beast in a cross-fit group.

A bit of old T-shirt wisdom works every time….with a little help from a wife that hides the remote control and tells me to “get to the gym.”

I don’t think Katherine has ever built a Chicken Sauce Empire, but it seems she has figured out the secret just the same.

Maybe it came to her while she was swinging Matthew on the playground out back.

It just takes a little push. 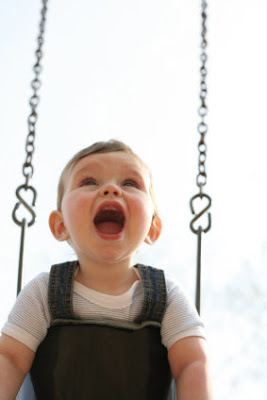 Ryan
I work with asphalt and write stuff.